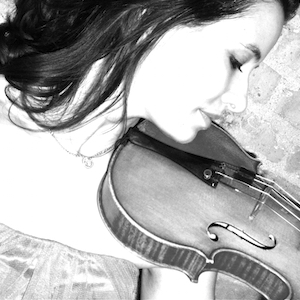 Talia has a Master of Music, Bachelor of Music, and a Performer’s Certificate from Northern Illinois University. As versatile artist, Talia performs with classical, jazz, and pop ensembles. Her chamber music interpretations have been called “remarkably sensitive and mature” by John von Rhein of the Chicago Tribune. Talia is Assistant Principal Second Violin of Camerata Chicago, an ensemble with whom she has toured Europe. Talia is also Concertmaster of the Chicago Jazz Philharmonic, with whom she recorded Orbert Davis' Emmy Award-Winning Soundtrack, DuSable to Obama, Chicago's Black Metropolis.

Her experience in chamber music and world music includes additional appearances with Alan Vizzutti, Mark O’Connor, and with Rana Santacruz at the Chicago World Music Festival. She has played under the baton of world-class conductors such as Daniel Barenboim, Pinchas Zukerman, and Pierre Boulez as a member of the Civic Orchestra of Chicago.

Talia has toured internationally in chamber music festivals including the Zeist Music Days in the Netherlands. She has studied with the Grammy-nominated Vermeer Quartet and trained in one of the world’s premier string quartet programs under the auspices of the Vermeer. Her principal teachers include Shmuel Ashkenasi, Mathias Tacke, Blair Milton, and Robert Hanford.